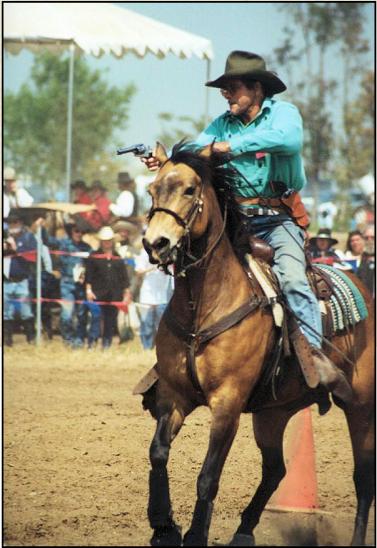 If the horse and rigging looks different in the two pictures, it's because one is the rearing horse on which Peter completed the
first round. During the retry, he did a clean round on the second horse (although we're not sure which horse is which.) Thanks Barb. 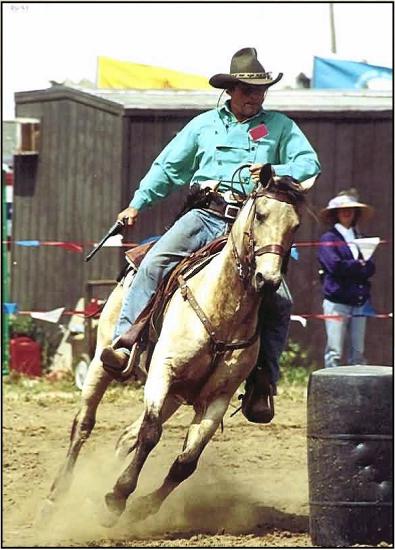 This event took place in Norco, California. Peter participated in the celebrity autograph session and he competed in the Mounted Cowboy Shooting competition. Proceeds for the overall event went to the Roy Rogers and Dale Evans Happy Trails Children's Foundation.

And the winner of the Mounting Cowboy Shooting competition was Ben Cooper. As the last rider, he edged out (by 3/100 of a second) LoriDawn Messuri who had been leading the entire time. She was the first rider. She shot a clean round and her time was just over 41 seconds.

Peter shot cleanly over the first five, but as he was rounding a barrel and changing guns, his horse reared straight up. When he came down, the horse ducked out to the left and Peter went to the right, hitting the ground on his right hip. He found out later he'd been assigned a trained rearing horse (a little late). Peter was offered a re-ride on a different horse, so he went again and had a clean round with time about a half second behind LoriDawn.

So Peter was third and a little sore but ready to do it again any time. Bless his nonchauvanistic heart, he didn't seem to mind that his friend LoriDawn beat him. They all had a great time.

If anyone has a photo or video grab of Peter's horse rearing during this event, please let us know.