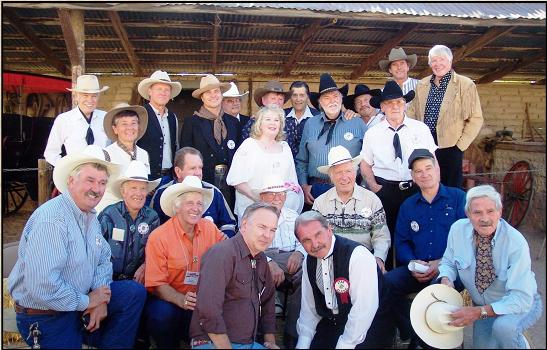 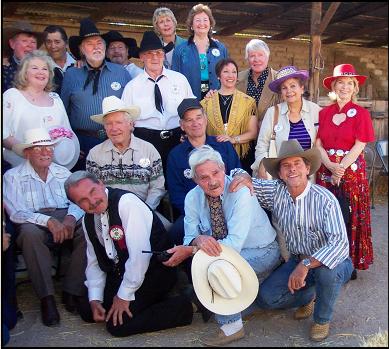 These shots are during the reception. In the left photo, Peter is in the top right corner. 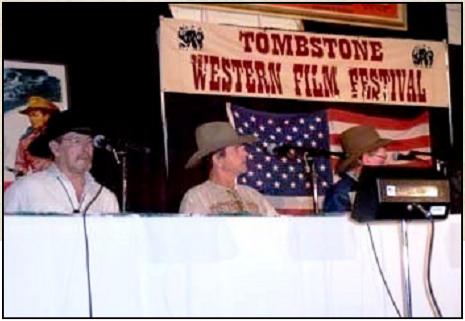 Each of the actor celebrities had a screening of an episode of one of their appearances. They screened an episode of Lawman "The Locket" for Peter. Peter answered questions afterward, some of which came from Bruce Boxleitner.

William Smith, Peter and Will Hutchins on the Q & A panel

After the Friday night dinner, each celebrity was given an official "Marshal of Tombstone" certificate 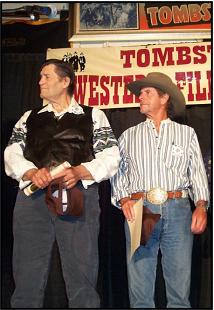 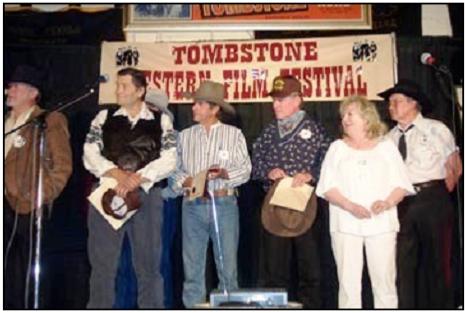 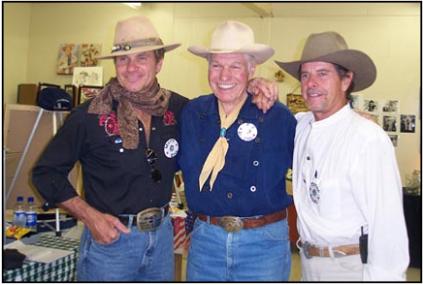 The site of the legendary shoot-out, the Earps and their supporters vs. the Clantons, et. al., is now a privately owned tourist attraction. It features cheesy plaster statues of the shooters and a button you can push to get an amusement park type description of the gunfight over a loudspeaker. The New York Times Entertainment section wanted some pictures of a few of the celebrities to illustrate the story below. Kerstin (Peter's then lady friend, now wife) and I were allowed to tag along and take some photos of our own. They cut Peter out of the photo that made it into the Times, but not so in our photos. The article is posted below, but its largely illegible. 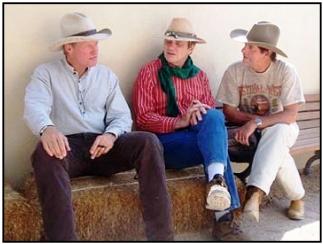 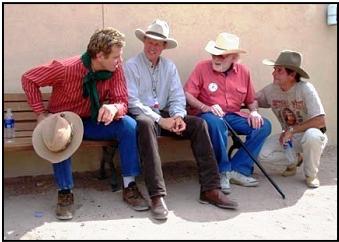 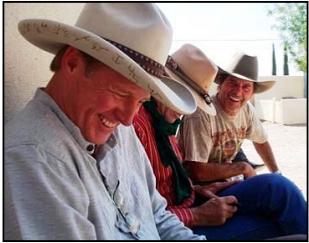 While waiting for Harry Carey, Jr. to arrive, Bruce Boxleitner, Marty Kove and Peter reminisced about the camaraderie of their Hole in the Wall Gang annual ride/camping trip. This is apparently a no-women allowed affair where everyone gets down and very dirty. Bruce also shared some of his experiences in filming a Civil War drama with Robert Duvall and others. He took great joy in the research he did on his character.

Bruce had intended to be a history professor prior to taking up acting. He put his interest in historical research to good use in writing his two western/scifi novels Frontier Earth and Searcher, the first two in what was to be a series of books that take place in Arizona in the second half of the 1800s. Bruce says he's too distant now from his Babylon 5 fame for the publisher to promote them as being written by the star of that show. However, there has been some interest from the movie community. The books are excellent.  The first takes place in Tombstone during the conflict between the Earps and the Clantons and expertly weaves the history of the area into a story in which the main character is an alien trying to save the Earth from evil aliens. The second book moves some of the action to Tucson. 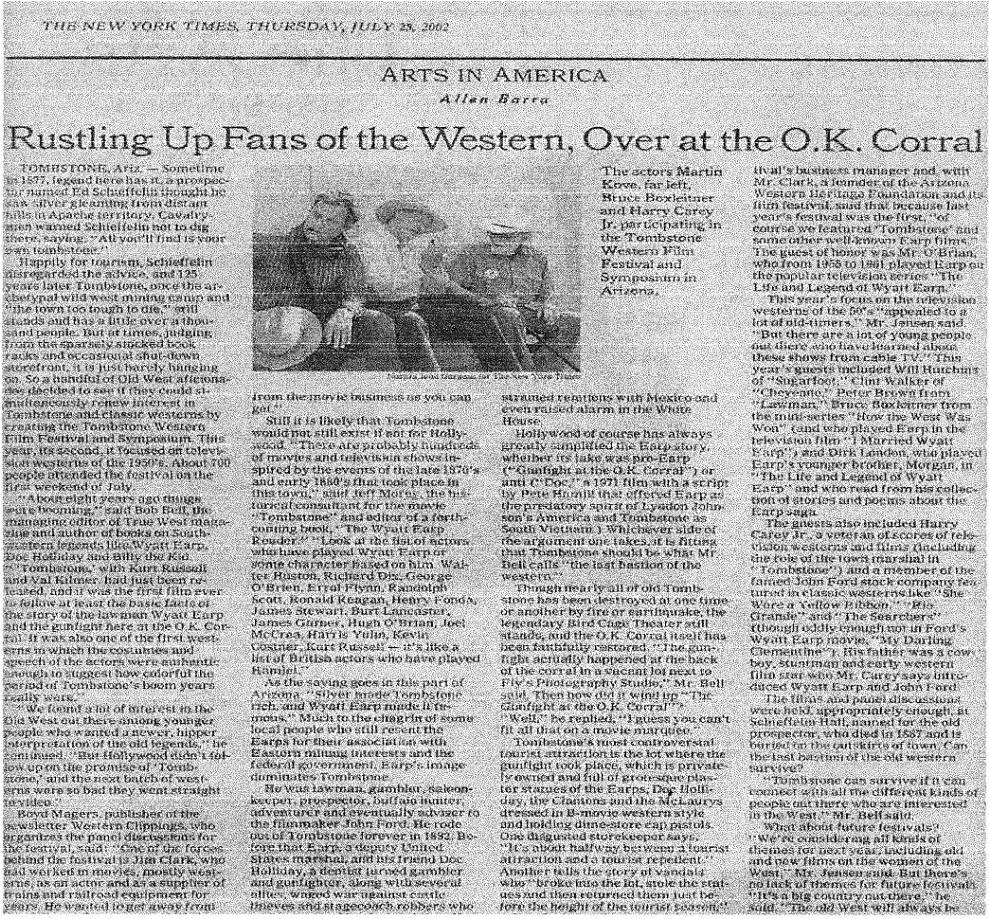 Click here to see Jim Kenny's photos of his vacation in Tombstone 2001. 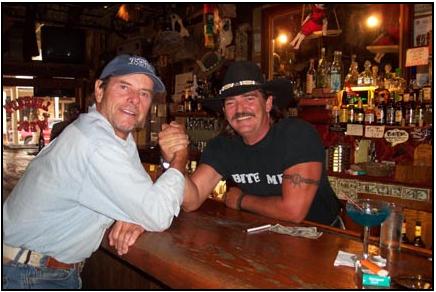 Peter at a little bar down the street from the Crystal Palace. Arm wrestling for drinks?

THE STARS IMMORTALIZED IN CEMENT

Each of the celebrities (except Bruce Boxleitner, who made his block at the 2001 festival) personalized a cement paving stone. Bruce said they had a lot of trouble getting the cement to set in 2001. The 2001 festival was cursed with monsoon rains rather than the unrelenting heat of 2002. The minute they removed their hand, everything flowed together like soup. No such problem this time. 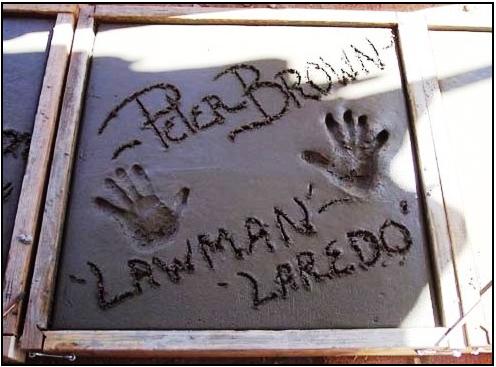 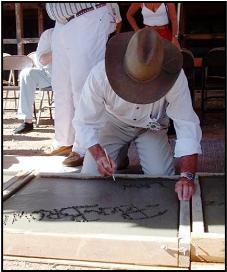 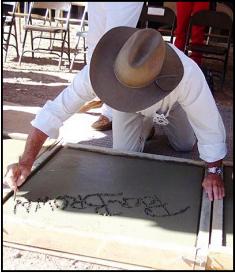 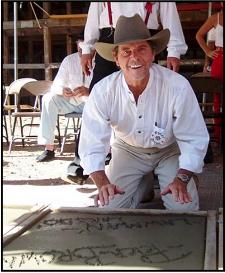 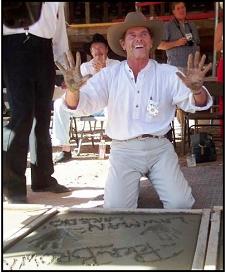